Between Xi’an and Beijing, it’s been an incredibly busy few days. As I finally get time to put all of it down into a post, it’s hard to narrow it all down! We’ve been to the Terracotta Warriors, a Han Dynasty tomb, a traditional Buddhist pagoda, an exhibit of ancient Chinese characters etched into stone, the Great Wall of China, and we rode a bullet train. A whole lot of activity throughout this remarkable country.

We left Guilin for the city of Xi’an and met up with a new tour guide for our next few days. She took us right away to an ancient Han dynasty tomb, where we learned about different burial rituals and saw some ancient clay dolls and burial pits. Apparently tombs are all over the city of Xi’an, and archaeologists are hesitant to dig them up for fear of ruining the contents of the tombs. This meant we couldn’t see the inside of the actual tomb, just the burial pits nearby.

The next day we went to the famous terracotta warriors, and they certainly lived up to all of my expectations. Thousands of warriors fill a massive hall around a group of burial pits, half of which still haven’t been dug up. The warriors used to have bright paints on them, but they faded within a week of exposure to the air, so archaeologists are leaving many of the warriors underground until they have a better way of preserving them. In addition to seeing the thousands of reassembled warriors in their pits, we also saw people working on reassembling and restoring other warriors from the shards in the pits, which was pretty cool. The warriors stand between 5’6 and 6’3, much larger than life considering they were made over 2100 years ago. Overall, it was absolutely incredible and it alone would be worth a trip to Xi’an.

Our last day in Xi’an, we said goodbye to our guide and left via bullet train for Beijing. As we left, the air pollution was so bad in Xi’an that we could see a gray haze everywhere we looked, and couldn’t see more than maybe 100 meters. It was unreal, I’ve never seen anything like it. I thought Beijing would be worse, but we lucked out and the air quality is better here than it’s been in weeks! We got to bed early on arrival, and got up early to go hike along the Great Wall! On our way there, we stopped by the restored section of the wall so we could see what it used to look like and see it covered in tourists. We continued our drive along the countryside and saw various ancient ruined sections of the wall, abandoned along mountaintops in the country. Thanks to fortuitously clean air, we could see for miles from the mountaintops we hiked along, seeing sweeping views of the mountainous Chinese countryside and the Great Wall extending out before us and behind us. It was an awesome experience.

We have a couple more days in Beijing to see the Forbidden City and Tiananmen Square, then we’re off to Japan!

(Also, I had always thought that Chinese people didn’t know about the protests in Tiananmen because of censorship, but I talked to my guide at length about it and apparently most people know and consider it an embarrassing part of their history. So I thought that was interesting.)

After two weeks exploring various areas of Chile, my time here has finally come to an end. It’s been amazing getting to explore the beautiful city of Santiago, and the even more beautiful park of Patagonia.

My last few days in Patagonia were quite eventful. We hiked through the French Valley and up to the French Glacier, went horseback riding around two different areas of the park, and I celebrated my birthday!

The French Valley hike was gorgeous (that’s where the featured image for this post is from), it had stretches of dead white trees that vaguely resembled the White Tree of Gondor, stretches of beautiful lively greenery, calm lakes that reflected the scenery as natural mirrors, and large glaciers always looming above us in the mountains. It was also not a strenuous hike, which was a nice added bonus.

Horseback riding was a fun change of pace, as normally I’m not a big fan of horses. It was fun to try it out and find out that it’s not so difficult if the horses are well trained (The second time we went, my horse was not well trained. I just had to let it decide where it wanted to go because it wouldn’t listen to me, which was pretty terrifying).

Chile has been an absolutely gorgeous and incredible country to visit. I can’t wait to come back!

After a couple of days in Patagonia, we’ve been able to explore more and see more of what this beautiful land has to offer. At first pass it reminded me of New Zealand with its rolling hills and open fields, but I’ve seen that there’s so much more to it. Yesterday, we hiked for about 4 hours up to the ‘Mirador Base de las Torres’, a scenic overlook of the towers in the park. Rather than grassy hills, we were hiking up steep, rocky, mountainous terrain. We hiked so high that the mist became snow, and as the weather worsened we found ourselves hiking in a snowstorm up to a glacial lake and the base of the towers.

The hike was gorgeous, and provided some incredible views of the park. We all felt the rough descent, and we were pretty excited to have beer waiting for us back at the van!

Today we decided to take it a bit easier, and went on a short two-hour walk through flat land and over to some cave paintings from 9-10,000 years ago. We saw quite a few guanaco (guanacos?), which were completely unafraid of us. We also saw quite a few guanaco carcasses, courtesy of the pumas in Patagonia. That attracted condors, so we got to see a bunch of them as well! Thanks guanaco! And puma…

In the afternoon, we went on a horseback ride through some flat areas of the park. While horses are pretty scary giant muscly things, it was actually a lot of fun riding around and seeing more of the beautiful park. And it was pretty nice to be sitting for a change!

A couple of days ago, we finally said ‘Adios’ to Santiago! It was a gorgeous and all-around incredible city, and after 5 days we met up with our parents and flew down to Punta Arenas. It’s just about as far south as you can possibly go, and even hosts excursions to Antarctica! If we’re lucky, we’ll be able to snag a day-trip and check that continent off.

Ever since arriving in Patagonia, I can’t help but think about how much it looks like New Zealand. Between the rolling hills, jagged mountains, and abundance of sheep, it really feels like I’m back in the Hobbit’s homeland! The area is absolutely gorgeous, and we drove for upwards of 5 hours today without seeing any part of the land look any less beautiful.

After a long drive, we finally came to our home for the next 5 days: Tierra Patagonia. The hotel is incredible. From the exterior looks like an capsized boat, and the interior is beautifully decorated with local wood and walls full of windows. We did a half-day hike on arrival, walking around the area and taking in some views of the mountains and the lake in the national park. I’m looking forward to more of this amazing park!

After a few days in Santiago, Lexi and I have been able to settle in and get a better feel for the city. While it’s ridiculously hot and I’m a bit sunburned, the city just gets better and better. We visited Lastarria, a small neighborhood of a few blocks near one of the Universities in Santiago, and tried out local beers and coffees. I also picked up a waffle full of strawberries, bananas, nutella, caramel, and whipped cream. It was incredible, and made the trip worth it on it’s own. 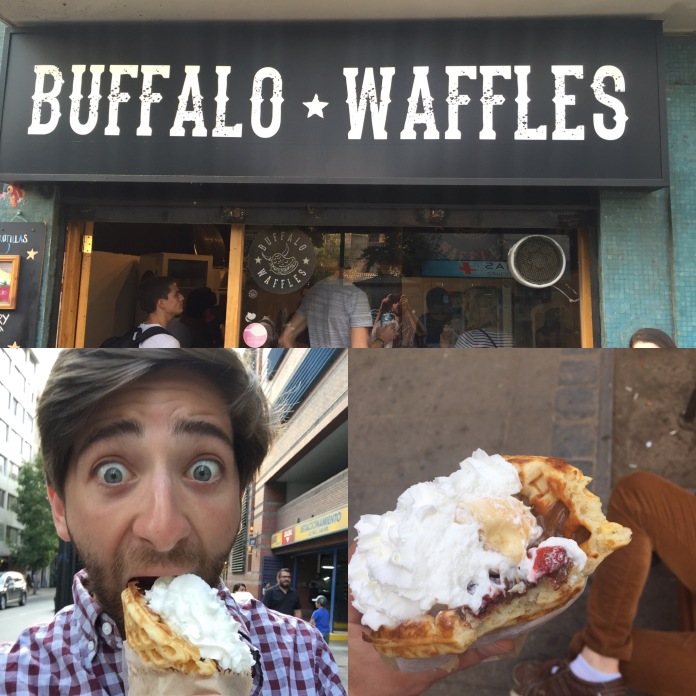 The next day we got up and went to hike up the San Cristobal hill. It’s supposed to be a 30-45 minute hike, but we managed to get very lost. We took the wrong turn at every possible opportunity, and wound up in a construction site on more than one occasion. Somehow we still made it up in just under 45 minutes, but it was hot, steep, and overall very painful. Finally getting to the top was well worth it, though, as we were rewarded with gorgeous views of the entire city of Santiago!

We have arrived in Santiago and spent two days so far exploring the city. It’s been amazing, and the city is very different from any city I visited in Colombia. The infrastructure seems more modern, and the drivers all respect the rules of the road! It’s great!

We landed some time around midnight on Sunday, and went straight to our apartment and to sleep. The next day I got up early, walked around the neighborhood we’re staying in, Las Condes, and checked out a rather giant shopping mall. Later, Lexi and I went to a climbing gym, as it’s been a couple of weeks since we did any climbing and we were anxious to see what it’s like here. As it turns out it’s very hot, a bit slippery, but overall very familiar and everyone was very friendly. We came back, exhausted, and went to sleep.

Finally, we spent most of today on rental bikes, going up and down the main street through the center of the city. We stopped at the Plaza de Armas (I think?), went through a few different parks, and got to see how most of the city conducts a standard Tuesday afternoon.